OOO’ snap! :O. Did killa just reveal his most incredible hot wheels phenoms he RIPS up the tracks with in Asphalt 8?. Did killa really go there?, could this beeeee???

Of course it can! :D. Anything is possible with me, I am that unpredictable and today with great pleasure I give you a first observation into my legendary Asphalt 8 car collection :D. I have been playing Asphalt 8 for a while as i have mentioned in previous blogs, and have been having a terrific time, and during the process I have accumulated some very fast rides :D.

So i’m going to be dropping some images etc, in here from time-to-time until I am able to finally move into something bigger which i plan to, in regards to what i would like you to experience with me while I play through the game, which will be possible down the road. But for right now, put on your seat belts on :O

I just obtained some new stuff for the awesome speedy garage, so it’s only standard that I show them off here in the original garage episodes :D. I Have been playing the Asphalt 8 update lately, and got myself some brand new bikes, that’s right you heard me correct BIKES! hahaa — check them out. 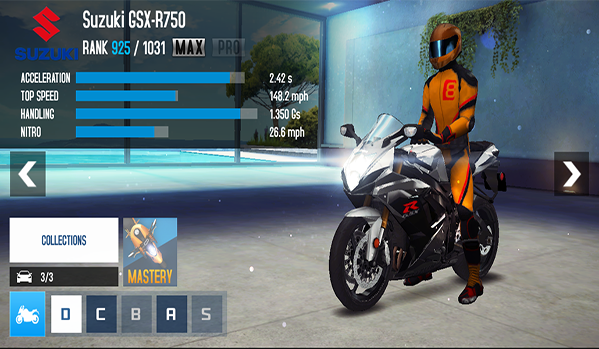 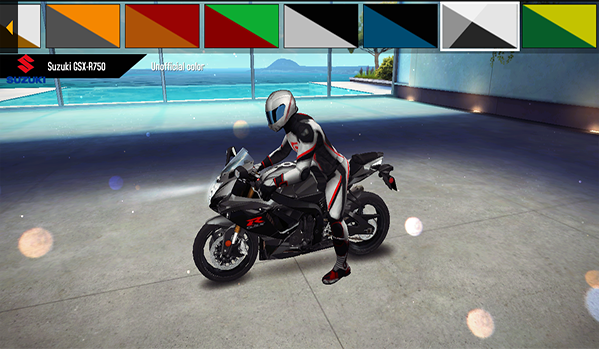 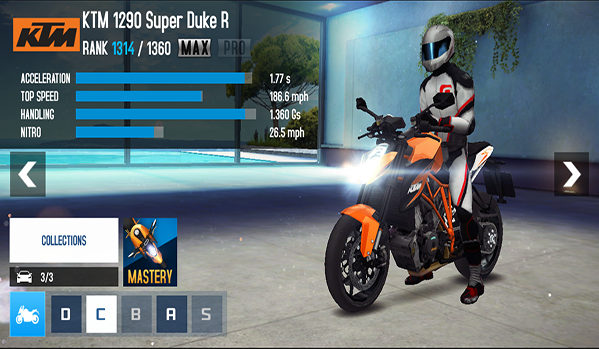 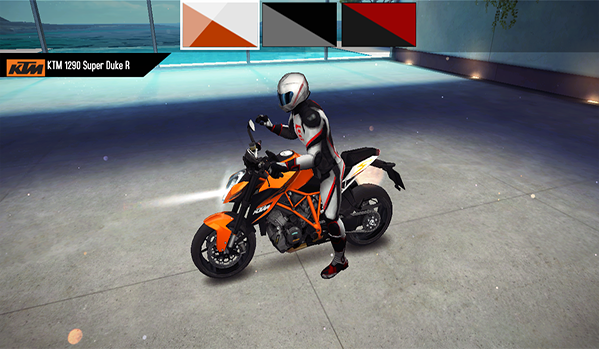 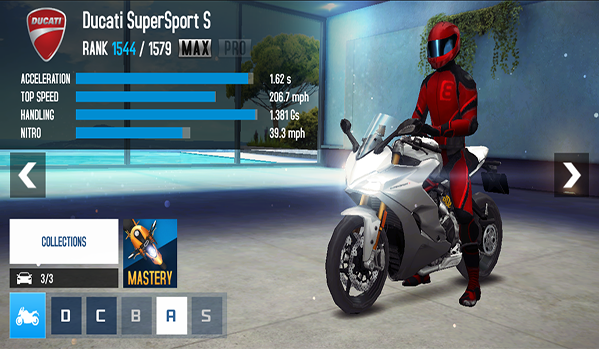 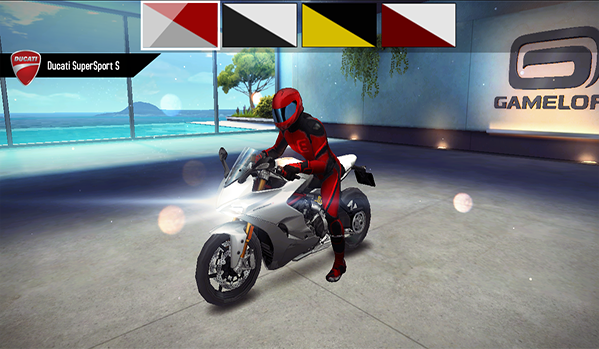 As you can see, I have managed to grab up, not 1 or 2, but THREE super speedsters lmao. These are just the crazy few I have so far, more might be added soon depending on how things go with the next set of events, so be on the look out!

More exciting pictures for your viewing pleasure. This time in the lightning speedy fast Mclaren Mercedes MP4-25 that they released the championship for in the game recently, and this thing is like a crazy missile on wheels :D — check it out:

These is one “curious” situation going on here with the Car Mastery mode for this car, which is that this car has a regular max Rank of 1766 but in it’s mastery, the final mastery challenge can only be unlocked if the car is pro tuned to 1767 but the car currently can only be pro-tuned to 1766 so i don’t know if it’s a bug or they have something planned but for not it doesn’t make any sense, so that’s the only thing that’s for right now, questionable. But there is no question that I won car and yet again it’s a blast to drive and compete with and it’s championship was crazy.

So the crazy guy is back in his crazy garage to give another crazy update because crazy is what killa is and what killa does, and i’ve earned alot of fun monumental prizes since the last update, so here is a look and some of the speedy few :D.

First up we have the; Mclaren M14A:

This car absolutely flies. I was really thrilled to have finally won this car in its championship. Despite it not being a top tier car since it is a C-Class car therefore not being nearly as fast as some of the other cars I have driven in the game, it is a blast to drive and compete with — definitely not disappointed in this car and it seems to have special stats it is among the only car in the game that has excellent and high attributes in all given stats, i.e it has super drifting capabilities, super handling, super acceleration, good top speed and good nitro effectiveness. Typically most of the cars only truly excel in one stat but it seems like these F1 cars are a bit more unique in terms of their fairly good stat ratios that give them pretty optimal performance in all areas, and in the hands of someone who can handle them, they can be any opponents worst nightmare on any track :D

Didn’t get this car the first time it was available through its R&D event but I couldn’t pass the opportunity to get it when the event showed up recently :D

And now we have a the very challenging; Renault Sport R.S 1

Can’t help but think the “R.S” in its name stands for real superb :D

Trust me you don’t want to be at the skid marks of this MAJOR trail-blazer because you know it could only mean one thing — crazy azz driver is in town! xD.

Check this out, another crazy race and yet again more crazy results.

Let me break it down because this situation is absolutely crazy as usual for me :D. I was racing with the Mclaren675LT to get some credits, because you can never have enough credits in Asphalt 8, then coming to the finishing line, I decided to hit the ramp and when I did that, I was going so fast (and experiencing a technical issue which is a story for another day) that the car veered sharply to the right and went off course.

During this tricky situation, knowing me, I decided to experiment and see just how far I can get the car without crashing into anything and I was doing it so good and passing through many “loop-holes” that the game said “no man you’re too ****in’ siiiicccckk!!!!” xD, and glitched and all of a sudden most of the terrain disappeared leaving me in a wide oasis of emptiness, so I no longer necessarily had to worry about crashing into any of the stage’s “graphical aspects” so-to-speak and I managed to keep control of the car even way into and through the glitch.

If that wasn’t crazy enough, I did so well that I actually managed to steer the car to the stage’s finishing-line and still win the race throughout this whole perplexing crazy affair as you can see in the picture :D. #Classic

what where?, what is killa doing waaaaaaaaaay!! up there?, how about busting 10 spins in the air!! xD. It was all before crashing into that building into a fantastic semi-explosion! :D

lmao at this massive air time. I’m telling you this game gets extremely hilarious.

You know!! that it’s pretty obvious I went over that structure that’s circled in the picture. The car actually went over that and landed just behind it xD. #ClassicExample

It was good while it lasted. I have proved breaking into the top 100th positions, without double tank is possible xD.

Hours later the elevation continues. Raced with the Lamborghini Egoista and switched it up to the Trion Nemesis. Cheers to versatility :D.

Another trip down burying lane.

As usual against formidable foes. As usual it was two laps and one winner :D

This is what I call a spectacular finish. It was a really good race and it was very close as you can see by both how the race finished and in the results, but killa has the edge!. This happens more often than not but this one was captured :D

My my, killa is on a Spending-Spree! :D. Just around 8 Million credits and 10 Cars

And to top it off, the million dollar question: what is killa up too?, he wouldn’t just gain approx 8 million and grab 10 tons [of cars] just like that — there must be something bigger happening. Stay tuned kahahahaha :D

Features: Full custom pain job that never ever fades :D. Two exhaust systems to heat your azzz up. Equips with powerful V8 engines and requires not 1, not twin but a number of them, one for each rebound possible wreck per race, and if that’s not enough, this thing has excellent traction but don’t get too complacent cause you will bite the dust faster the an Evil Kenevil stunt gone wrong xD

Took this car for a spin, literally!:

Check it out! :D. I took the Mclarean for a spin and ended up doing 16 of them in the final lap heading towards the finish and in first position — Golden! :D

I know it’s showing 15 spins on the right hand side of the picture but that’s only because I didn’t capture the sequence at the last frame. I actually went on to do 16 spins in all. it’s not my highest but this one was captured :D

lol look at the epicness in these results below:

I didn’t even have to show me racing to the finish — this epic result speaks for itself xD. look at all of these pro-leveled Trions all fully powered up and I “somehow” (I use ‘somehow’ loosely xD. I mean come on, it’s obvious why I placed in the top — SKILL) managed to come second. That was another epic race with very good races too asphalt 8 has lots of them, so I don’t want to give the impression that alot of my races are easy races because that’s not the case, alot of the time i am matched with skilled racers, but how does one manage to come second among a group of Rank 1805 + fully boosted Trion Nemesis cars, with a Rank 1758 double boosted Trion? — crazy as f**k!:D

Just putting up some fun pictures here of a race i did recently along with its results. Alot of the times some really crazy things happen in this game that make you laugh hard as heck :D. It is just that I don’t usually capture them since I don’t have the proper means to at the moment, but check out the situation below:

This is when you’re racing so swift, people practically just disappear from the race after which it’s literally just you against the clock at that point xD. I was flying through this stage with the Trion Nemesis, from the time it started till the time I crossed the finish-line, for THREE whole laps, against some very fast competitors (these images don’t really capture how close this race in was — i was still speeding through this track like heck never the less), then all of a sudden, every one started to drop out of the race and it was literally just me forever upfront demolishing the track alone like if it was practice or qualifying or something lmao!.

I wish I could capture this stuff on video — stuff you absolutely have to see to believe xD. Asphalt 8 = Epic fun

The Pagani Zonda R is a beast, need I say/show more? :D

Now this is the car the killa has been killing it with before I got any of the others (i’ll show you those coming up).

When i’m in this car, corners/curves/bends practically don’t exist :D